Oil palm smallholders in some regions in Indonesia keep working while they are fighting against COVID-19 pandemic. In Asahan Regency, Province of North Sumatera for instance, oil palm farmers continue replanting their old trees in effort to boost productivity. 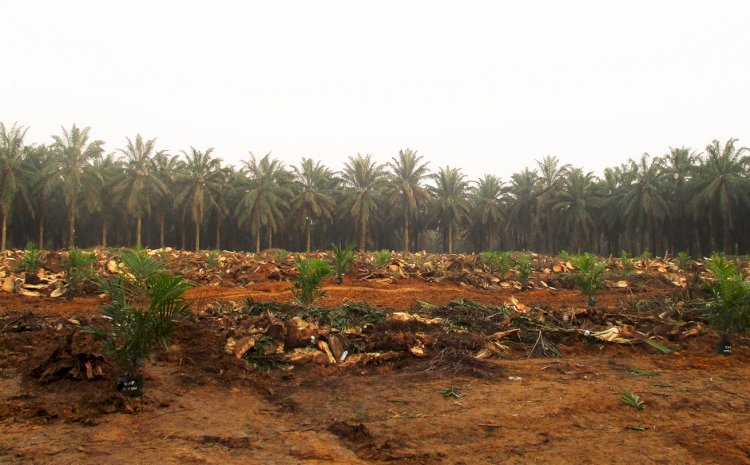 ASAHAN—Oil palm smallholders in some regions in Indonesia keep working while they are fighting against COVID-19 pandemic. In Asahan Regency, Province of North Sumatera for instance, oil palm farmers continue replanting their old trees in effort to boost productivity.

Following health protocol and practicing physical distancing, the local government of Asahan regency kicked off oil palm tree replanting program for smallholders (locally known as PSR), Thursday (9/4/2020). The program was carried out on 62.887 hectares plantations owned by smallholders who are member of famers group Subur Jaya of Mekar Marjanji village at district of Aek Songsongan.

Oktoni Eryanto, Head of Agriculture Office at Asahan Regency said in a press release that the PSR was launched with a grant of Rp25 million per hectare from the Indonesia Oil Palm Plantations Fund Management Agency (BPDPKS). The fund was disbursed to cover replanting cost, pests and diseases control, fertilizer supply as well as provision of certified high-quality seeds.

Initially, Oktoni said, the replanting program which was the first in Asahan regency, was scheduled to be formaly launched by the regent of Asahan. However, to avoid crowds as part of physical distancing to reduce the risk of the virus being transmitted, the program was kicked off without ceremonial event. “The regent of Asahan instructed me to launch the PSR program without ceremony,” Oktoni said.

He added that Asahan government has scheduled a replanting on 237,53 hectares of oil palm plantations that was proposed in 2019 conducted by farmer group of Subur Jaya and the Poktan Baru of Sei Kepayang District.

The current replanting program was on the plantations managed by farmer group of Subur Jaya while other proposals are still in the process of fund disbursement. For 2020, Asahan government has set replanting target on 1,000 Ha. *** (Sumber: Harian Andalas)

Govt Wants India to Give Indonesian Palm Oil a Priority