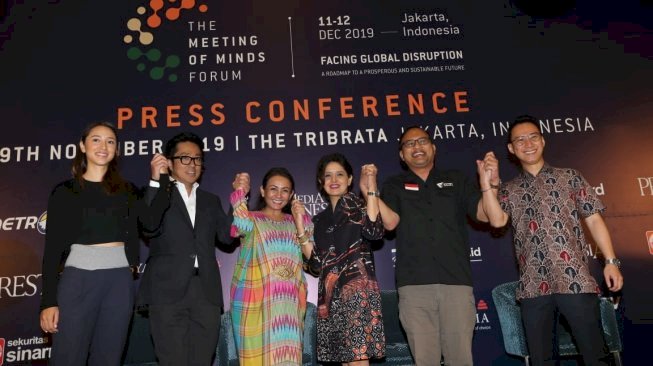 JAKARTA – The Meeting of Minds Forum (MeMinds) is an international conference on the initiatives to achieve sustainable development among environmental problems and solutions amid global disruption, held by on 11-12 December in Jakarta.

This conference aims to bring together young people in ASEAN and MENA (Middle East and North Africa) who have concern to sustainable development.

A number of speakers attended and discussed various issues related to the solutions to the Sustainable Development Goals through Islamic finance and banking; sustainable policies for forests, agriculture and food security; encourage income and sustainability through endowment solutions, business, venture capital and for gender and youth empowerment; the role of science in new biology and biotechnology; artificial intelligence (AI) and information technology communication revolution.

“In this forum, Indonesia plays important role because its position as  the largest economy drive in the Southeast Asian region, with more than 270 million population and Muslims as the majority. "The rapid growth of Islamic finance and banking, Indonesia will become a valuable study reference for the world," Salina Nordin CHFC, Deputy Chair of the Salina Forum MeMinds, said in a press release.

The discussion about the themes will be useful for the countries in the region of ASEAN and MENA.  According to the Asian Development Bank, around 9,8% of Indonesian's population lives below the poverty line, in 2018. Access to food sources in Indonesia is also imbalanced (World Food Program data), and it is influenced by several factors such as poverty and lack of infrastructure.

The forum also hopes to be able to contribute for future generations in resolving major problems such as world concern’s on climate change/natural damage, income inequality, poverty, food and water security, lack of education, welfare security, and lack of economic and employment opportunities. ***

Government Regulation No 61/2010 on Implementation of Law...

Projection of Contribution of Palm Oil-Based Biofuel to...