The replanting program on smallholders’ oil palm plantations is believed to turn out to be the foundation of palm oil advancement in Indonesia. 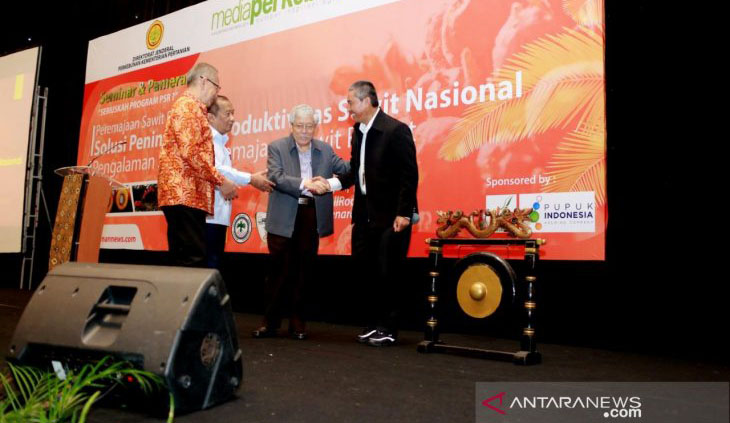 The replanting program on smallholders’ oil palm plantations is believed to turn out to be the foundation of palm oil advancement in Indonesia. This program, widely known as PSR, is not only to replace old trees with ones but also to make some improvement in other aspects in oil palm plantations.

Bungaran Saragih, ex-minister of agriculture, told the audiences during the day-long seminar themed “Is the PSR a Serious Program?” organized by Media Perkebunan in Jakarta, Wednesday (10/7/2019). “That is why we must think not only micro but also macro,” he said.

In that case, he said, the Government must develop smallholder farmers’ oil palm plantation in order to avoid problem in the future. “I see this program as a strategy to synchronize the central government with the regional ones.  That’s why the President engaged more intesively in this program. It is because he wanted palm oil to reach higher level and be more sustainable,” Bungaran said.

Antarjo Dikin, Secretary General of Plantation at the Ministry of Agriculture, expressed the same opinion. He said, PSR can improve many aspects in smallholders’ plantations and it is important to undertake as many people make a living from palm oil. “Palm oil production has improved and developed regions. This is indeed a fact.”

However, Antarjo said, the rapid growth of palm oil industry has bothered other countries so much that they implement discriminatory practices against palm oil like European countries do. European countries aim at isolating and excluding palm oil to the benefit of other vegetable oils, including EU rapeseed.

“European countries put their own interest first. They do the same we do to develop their countries. Is that what they call sustainable?” Antarjo asked. Gamal Nasir, an agriculture specialist, had a opinion that the rapid growth of palm oil industry was because of palm oil has many advantages.

Data published by Directorate General of Plantation of Ministry of Agriculture shows that the industry has grown fast. In 1979 or at the beginning era of the industry, smallholder farmers owned 3,125 hectares land out of a total plantation of 260,939 hectares. In 2017, it expanded to 4,756,272 hectares out of a total of 12,307,677 hectares. “It shows that PSR program will be hard to implement unless we do it earnestly,” Gamal added. ***

Govt to Impose Fine For Businesses Disobey B20 Policy