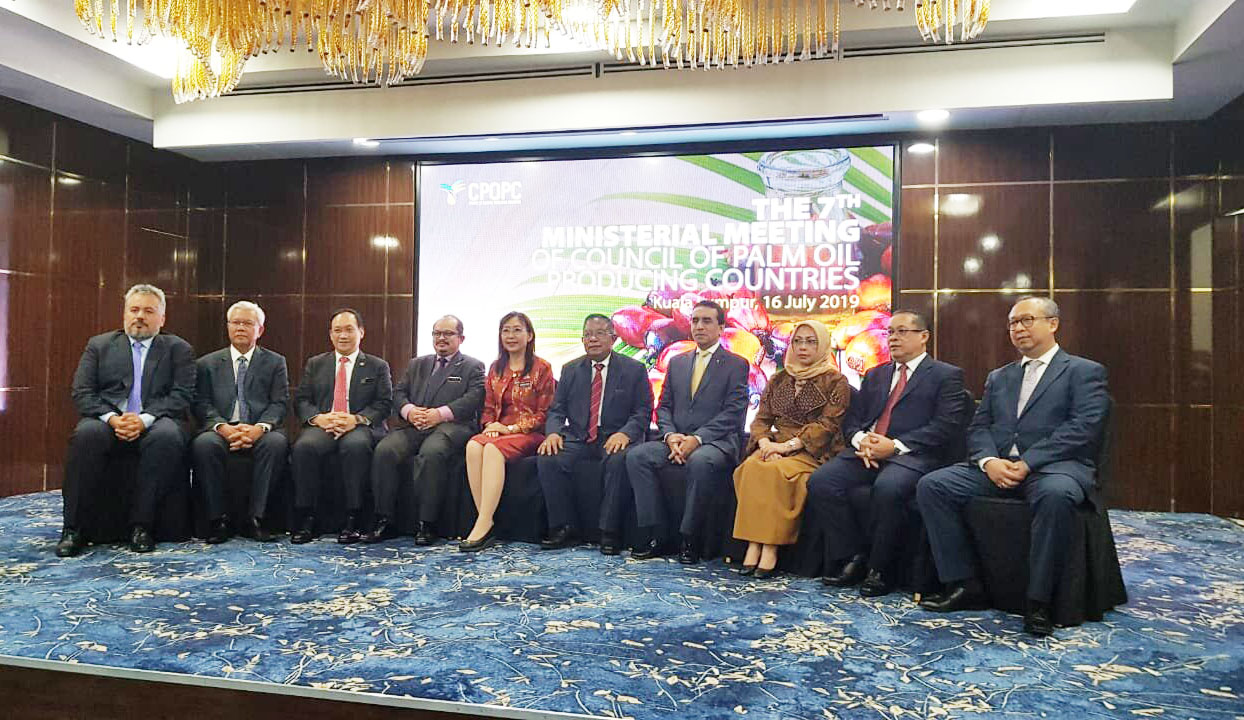 The Ministers from palm oil producing countries met in Kuala Lumpur, Tuesday (16/7/2019), to discuss a number of issues related to the palm oil industry, including international trade policies and market access, business and smallholder engagements, and the United Nations 2030 Agenda for Sustainable Development Goals (SDGs). Coordinating Minister for Economic Affairs Darmin Nasution and Minister of Primary Industries of Malaysia Teresa Kok co-chaired the 7th Ministerial Meeting of Council of Palm Oil Producing Countries (CPOPC). The meeting had also the presence of Mauricio Gonzalez Lopez, Ambassador of Colombia to Malaysia, in its capacity as an observer state. In the statement, the Ministers expressed regret that the Delegated Regulation has entered into force on 10th June 2019. This is despite the various efforts undertaken by producing countries to provide information on the sustainability initiatives. During the Joint Ministerial Mission of the Council of Palm Oil Producing Countries in Brussels, Belgium, 8-9 April 2019, the Delegation posed a strong position over the draft Delegated Regulation and expressed their grave concern to the EU leaders. Both Malaysia and Indonesia informed that their Governments are currently reviewing their relationship with the European Union and its Member States, and are committed to challenge the Delegated Act through the WTO Dispute Settlement Body and other possible avenues. Taking note that the CPOPC delegation and the European Commission agreed to have regular dialogues, the Meeting proposed to seek the establishment of a CPOPC-EU Joint Working Group on Palm Oil, as a new platform to further respond to the EU Delegated Act. The Joint Working Group (JWG) shall engage CPOPC Member Countries and other palm oil producing countries, such as African palm oil producers, and will raise the issue of the smallholders and poverty alleviation to counter the Delegated Act. The Ministers welcomed the findings of study on ‘Masterplan for the Strategic Implementation of SDGs in the Palm Oil Sector by 2030’ commissioned by CPOPC which lays out the foundation for a Master Plan for the strategic implementation of the SDGs in the palm oil sector by 2030. The study indicated that palm oil meets most of the 17 objectives of UN Sustainable Development Goals based on case studies conducted in Indonesia, Malaysia, Thailand, Colombia and Nigeria. On the issue of the contaminant level of the 3-MCPDE proposed by the European Commission, the Ministers agreed that one maximum level at 2.5 ppm for all vegetable oils should be adopted, as the acceptable safety limit for consumption. The Ministers agreed that CPOPC should continue working on the current issues related to palm oil industry, such as supply-demand, productivity, price stabilization, smallholders’ welfare, and the positive image of palm oil along its value chain. The Ministers welcomed the newly appointed CPOPC Secretariat Members for the period of 2019-2022, headed by Yusof Basiron as Executive Director, Dupito D. Simamora, Deputy Executive Director; Mohammad Jaaffar Ahmad, Director of Strategy and Policy; and Witjaksana Darmosarkoro, Director of Sustainability and Smallholders Development. The Ministers also expressed their appreciation for the excellent services of Mahendra Siregar as the Executive Director and Datuk Makhdzir Mardan as Deputy Executive Director from 2017-2019. The Ministers invited all palm oil producing countries to attend the Second Ministerial Meeting of Palm Oil Producing Countries (MMPOPC) to be held in Kuala Lumpur, Malaysia, on 18th November 2019.

Minister for Maritime Disappointed with Greenpeace Who...

Why Biodiesel Incentive is Needed