EXPERTS from academia convinced the public in Europe that oil palm plantations are not the direct cause of deforestation in Indonesia. 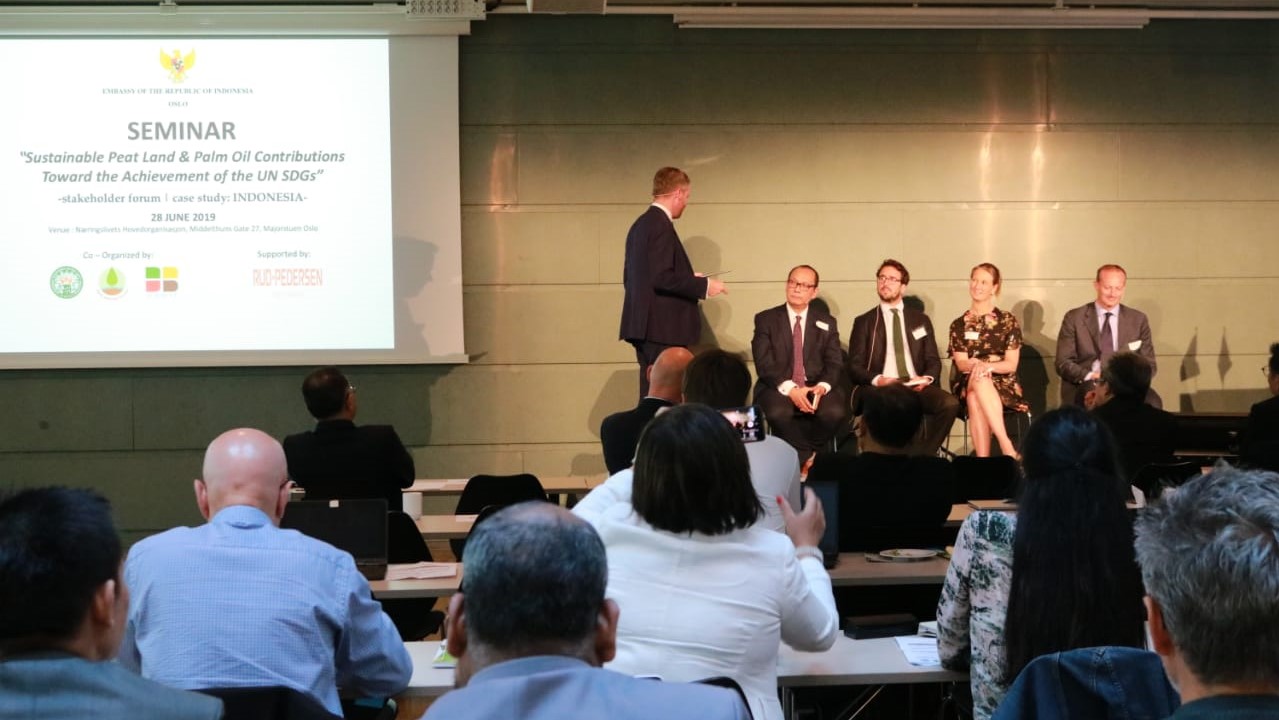 EXPERTS from academia convinced the public in Europe that oil palm plantations are not the direct cause of deforestation in Indonesia. At the “Sustainable Peat Land and Palm Oil Contribution Toward the Achievement the UN SDGs”-themed business seminar in Oslo, Norway, (18/6/2019), it was revealed that oil palm plantations in Indonesia were not built on forest but on degraded land generated from logging or bushfires. Professor at the Faculty of Forestry of Bogor Agricultural University (IPB), Yanto Santosa, revealed that his conclusion is based on the definition adapted by the FAO that deforestation implies the long-term or permanent loss of forest cover and implies transformation into another land use. “Based on a historical study of land use for oil palm plantation, it is proved that a year before business permits on palm oil plantation were issued, the lands’ status of large plantations were no longer forest areas. They were used for agriculture. It is in line with analysis of land cover showing that the land were open lands covered by shrubs, dryland farming mixed with shrubs, and also other plantations. Based on FAO’s definition it is clear that oil palm plantations didn’t cause deforestation,” Yanto said. He said, even if oil palm plantation which were built on secondary forest are labeled as deforestation, then they are only 20-25% of total oil palm plantations. The rest, 75%-80% is “reforestation” and it has increased the productivity of the degraded lands. “It is important not only for economic benefits, but also for increasing carbon stock or CO2 sequestration rates,” Yanto said. In his opinion, land conversion for agriculture is common in developing countries. “Land conversion economic benefits and food security is common, especially in developing countries, including Indonesia.” The same seminar also presented interesting topic on the palm oil contribution to Indonesia’s economy and to achieve the UN’s Sustainable Development Goals (SDGs). The presentation was addressed by President Director of The Indonesia Oil Palm Plantation Fund Management Agency (BPDPKS) Dono Boestami. He said Indonesia cares more about sustainability than before by implementing all necessary measures to make sure sustainable practices are employed in palm oil sector. “We care about our palm oil sustainability more than others, because it’s our life. And the efforts still continue,” Dono said. The government’s action included implementation of the rule on Indonesia Sustainable Palm Oil (ISPO), moratorium on new palm oil development and review of existing plantations as well as boost the productivity of palm oil plantations, restoration on peatlands, forest fires prevention, etc. Moreover, in trying to increase productivity, the government has introduced a Smallholders’s Oil Palm Plantation Replanting Program (PSR). The program allows farmers to increase productivity without starting new plantations. “Currently, the Government is in the process of strengthening the ISPO and persevering the moratorium on issuing new licenses to use land designated as primary forest and peatland,” Dono said. The seminar, officially opened by Indonesian Ambassador to Norway Todung Mulya Lubis, also had a presence of several speakers:  Chairman of the Indonesia’s Peat land Restoration Agency (BRG) Nazir Foead; Chairman of the Indonesian Palm Oil Association (Gapki) Togar Sitanggang, CEO 1st of Norway Kristine Vergli Grant-Carlsen, Manager Corporate Communication of Nestle Norway Axel Heiberg-Andersen, Special Advisor for Finance and Deforestation, Rainforest Foundation Norway Vemund Olsen, and Professor at John Cabot University Prof. Pietro Paganini. ***