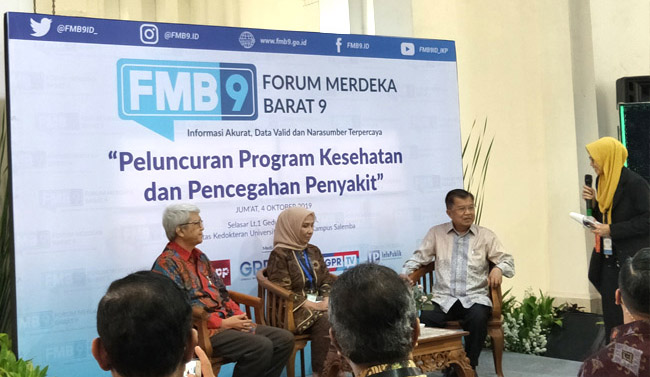 JAKARTA—Vice President Jusuf Kalla called on people to maintain a healthy lifestyle, by consuming cooking oil properly. Kalla deemed it necessary to remind about it as many people often repeat same mistakes when they use cooking oils such as repeatedly using cooking oil. Reusing cooking oil incorrectly is highly harmful for health. “We must inform the public about how to consume cooking oil properly. We must tell sellers and the people not reuse cooking oil,” Kalla said at FMB 9 Media Discussion on the Launching of Health Promotion Program and Preventing Diseases at the Faculty of Medicine of University of Indonesia in Salemba, Jakarta, Friday (4/10/2019). Vice President also reminded people to healthy eating pattern with balanced diet. The government has introduced “Isi Piringku” (literally means our menu), a promotional campaign to change previous campaign “4 Sehat 5 Sempurna” (literally means healthy food). The campaign is aimed to guide the public on daily healthy eating pattern that can be modified according to local food. At the same time, Vice President launched a program called Komunitas dan Kampus Sehat (Healthy Communities and Campuses) in University of Indonesia, UNS Solo, Unand Padang, and UMY Yogyakarta. “I hope the program can influence people to live a healthy life,” Kalla said. Earlier, Kalla visited an integrated education centre named Posbindu at the Faculty of Medicine of University of Indonesia. Posbindu is a public participation centre for early detection and monitoring risk factors of non-communicable diseases (NCD). University of Indonesia has 20 Posbindu with 140 volunteer who can reach all faculties at University of Indonesia. The volunteers are lecturers who has received training organized by the Ministry of Health. They are equipped with medical equipment provided by TNP2K (The National Team for the Acceleration of Poverty Reduction). Services provided by Posbindu at University of Indonesia included screening and physical examination such as measuring Body Mass Index (BMI), blood test to analyze blood pressure, blood sugar, cholesterol, etc. Komunitas dan Kampus Sehat is a program initiated by Ministry of Health in collaboration with TNP2K. The program is aimed to encourage educational institutions to actively take part in promoting preventive healthcare. *** (Source: Gatra/JPP/Republika)

After B20, Government Plans to Develop B100

PLN is Requested to Use Biodiesel