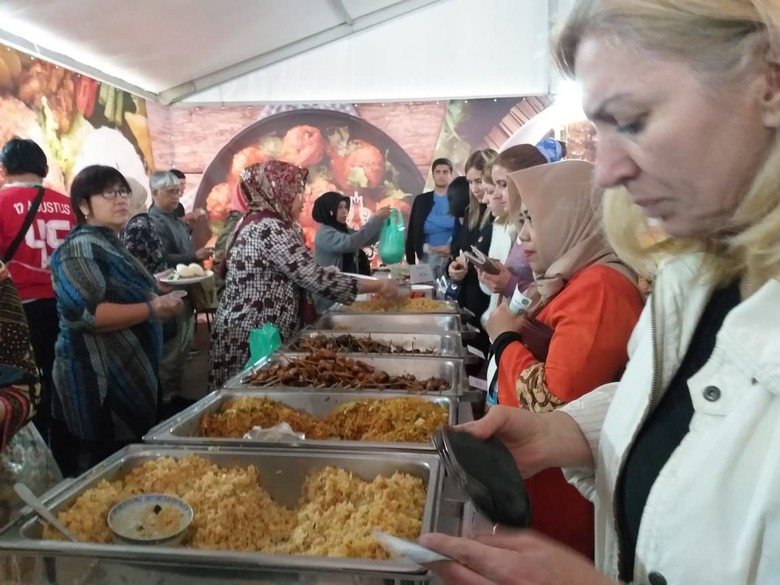 INDONESIAN vegetable oil producers introduced palm oil products, including cooking oil and virgin red palm oil at the Festival Indonesia 2019 in Moscow, Russia. The promotion event attracted many Russians who visited the festival which was held at Krasnaya Presnya Park, Moscow (2-4/82019). Indonesian Vegetable Oil Association (GIMNI) introduced various foods deep fried in palm oil, like potatoes as well as fried rice, meat balls and other processed foods. Potatoes make up a large part of the average Russian diet and they are commonly baked, not fried.

Once they deep-fry potatoes, they use sunflower oil which is easily burned. “Fried potatoes are delicious, I’ve just known it,” Norgul, a visitor, said. Cristina, another visitor, was very surprised to find virgin red palm oil products were sold at a booth in the festival. She said the last time she spotted the products was about eight years ago at a drug store in Moscow. Since then, she’s never found such a thing until she visited the booth.

Meanwhile, as reported by detikcom, apart from being very enthusiastic about foods like fried rice and meat balls, visitors also expressed enthusiasm for cooking oil and virgin red palm oil. No wonder, all products were sold out. Executive Director of GIMNI Sahat Sinaga said their enthusiasm about palm oil products had opened opportunity to expand the market in Russia. Currently, imports of CPO to Russia is around 1 million tons. Traditionally, Russians use palm oil for industrial needs, not for consumption. “This event has shown us that palm oils are not sold for retail segment.  If we can meet the demand, the market share will be higher,” Sahat said. (Sources: Warta Ekonomi/Detikcom)